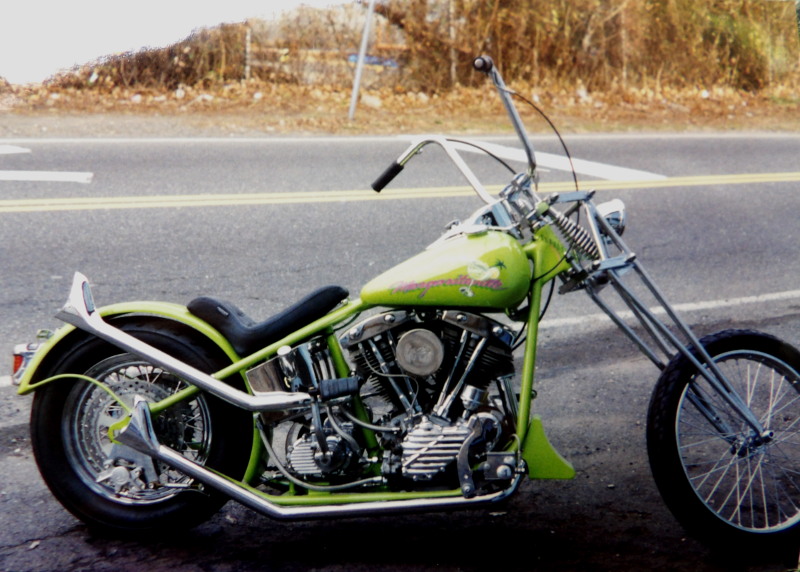 Where Chopper Supply began and Saddle Brook New Jersey ended.  One of the last bikes I built at Haledon Cycle, this 1949 Pan/Shovel was in an aftermarket swing arm frame and known as Big Red, because it was well... red. Big Red was a big dog. 74 inch displacement and Kehin butterfly carburetor, it could barely get out of it's own way. It would eventually get up to as fast as 100 mph, down hill with a tail wind. It was the first and last of the "Fix and Ride" program. The owner had recently got out of jail and the bike had been sitting and needed work. The first ride I took it on was over 400 miles through the mountains. I got back to the shop, left it idling while I unlocked the door and the electrical system fried there in the drive way. I was happy because at least it didn't happen out in bum fuck mountain land I had been riding through. Off to a good start. It's too bad I don't have a picture of it as Big Red.  I used to just get on it and twist the throttle wide open and shift through the gears. I really wasn't going anywhere fast, so it just became the normal routine.

As slow as it was, Big Red was fun and I had quite a few good times on it. One of those times I some how ended up on the George Washington bridge headed into New York City which was not where I was wanting to be heading and with a little bullshit and lots of laughing and a $1.00 ( Yes it was only $1.00 to cross the bridge back then, and that was expensive because they raised it up from the .50 cents it used to take) I talked to the toll booth attendee about my dilemma, and she answered "I don't see anything, have a nice night." There was always lots of goofy shit like that going on.

Eventually one day the owner decided to turn Big Red into Margaritaville. Margaritaville was supposed to get a Knuckle engine which never materialized. I believe that was just cocaine dreams and too much alcohol on the owners part. 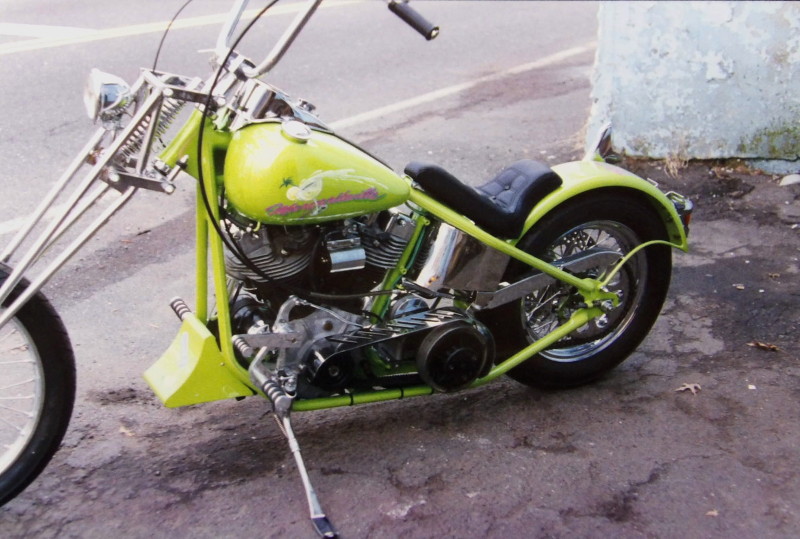 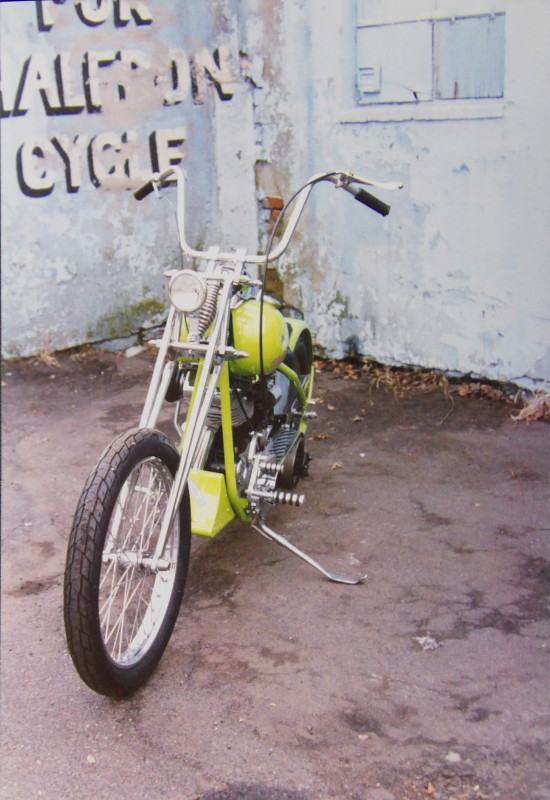 But none the less he had me order a rigid frame and the fine people at Paughco thought we should have a special rigid frame that was made to fit a Knuckle, instead of just a rigid frame like I wanted, which ended up a strange twist of fate, or maybe it was twisted steel, because when the Knucklehead motor the owner was supposed to get never happened , the Pan/Shovel motor was too tall and I ended up having to order another frame. The frame that didn't fit wound up as partial payment. I forget what was going on with the owner, some how I pretty much got paid.  Long story short, when Paughco "shortened" the frame for a Knuckle engine, they missed by a 1/4" and a Knuckle wouldn't even fit, so it had to be used for a Flathead, and I wound up using it on the Lunar Patrol Unit. I later found out that the 35 degree rake frame ended up being 40 degrees, so Paughco missed on that one too. Musta been a Friday after lunch frame or something.

The Durfee Girder on the bike was basically brand new. Some crack head had stopped by the shop one day looking for money to go score some shit and and wanted $50.00 dollars.  I usually send them people away as they usually only have junk. The girder was dirty, and I figured it would have to be rebuilt, but hey it's worth 50 bucks. Much to my surprise when he left and I started checking it out, all it was, was dirty and there was no wear on the bushings or anything! Score! I had no idea it was going to end up on Margaritaville, but I was now the proud owner of a new Durfee Girder.

Most of the parts on the bike were from Big Red. I don't even think the engine got rebuilt as the owner said it runs, just clean it up. The trans did get rebuilt. At least that shitty butterfly Kehin on it, got replaced with an S&S E.  Stuff like the pipes, oil tank, handle bars, front wheel and a couple other things were new.

Not really the way I like to build bikes. I don't need all new parts, but I like to rebuild the engine and trans and make it at the very least get out of it's own way. I didn't argue much because there is no sense doing work you aren't going to get paid for. I think my business partner paid me my balance, part of the reason I took the frame, to help him out. I moved to Texas in January 1998 and I went back to New Jersey the end of 1999 and the bike was sitting there all dusty and stuffed in a corner, still not paid for. The last time I had talked to my old business partner, he said he took possession of the bike. I have no idea what happened to the bike after that, and I'm under the assumption that the owner was back in jail.

As if all that wasn't enough I also got the bright idea to name my business Chopper Supply Company from the build.

Some people say there's a woman to blame, But I know it was a motorcycle and drugs. 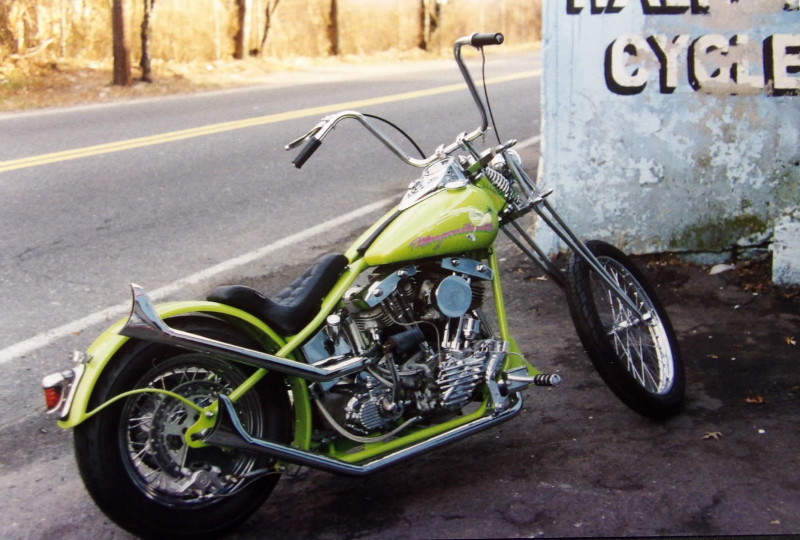