This is about my 2006 Bonneville that I ride and enjoyed building. Being a Harley mechanic it was unusual to build a bike and not have to rebuild the engine. That meant I could concentrate on the rest of the bike and design something good. 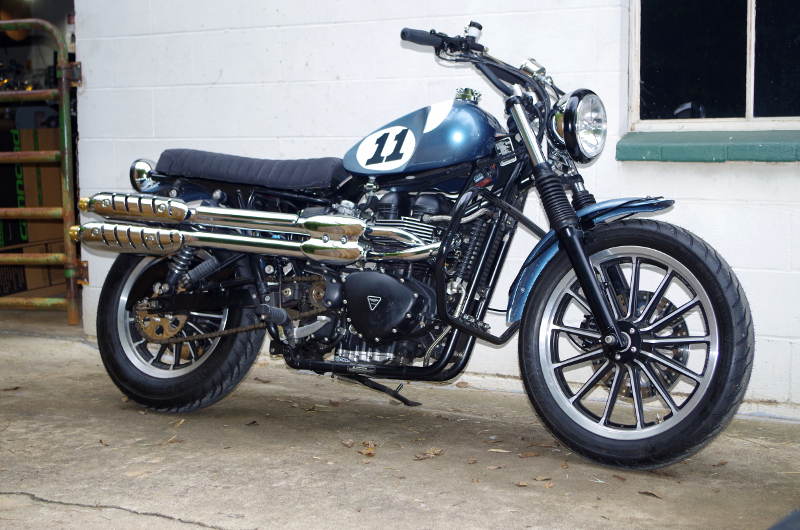 I worked on a red and silver 2005 Bonneville in 2011 and test rode it and thought “this ain’t bad”… Having only ever had encounters with old style 650’s and 750’s it was quite different and smooth. Not overly fast, but definitely kinda zippy. Had a cool look to it, not so much like a new modern motorcycle.

So I went on the hunt to see if I could find a newer Triumph Bonneville. It took a couple years and some really good luck, but I found one nobody wanted. That was unusual to make such a find, and that also made it so the price was right. It was dirty, been sitting up for about 5 years, neglected and was now outside under a bbq tarp. Even with green slim oozing out of the carbs, one of which wasn’t even in the intake boot, it started and ran on one cylinder. So I bought it.

Oddly the whole time I was purchasing this bike I was looking at what you see in the picture, the black one, the real thing, but in my mind I was seeing the red one I worked on, thinking I’ll tune it, go through it quickly and be riding in a few days. After all a lot of the purchase intention was based on that it will comfortably do highway speeds and not need to be worked on much.

About 6 weeks in, the bike is on the lift pretty much dissembled and I’m thinking…. What have I done? I wanted to be riding this by now, but I’m thinking about all the stuff I see that just isn’t cutting it for me. More of this is going to have to come apart, I need to fabricate a new battery box, whole new wiring harness, I have this tank I built about 2 years ago….. and there was no front fender….. and the rear fender and tail light is really crappy…. and ya know I really like Scramblers because it was mini bikes and dirt bikes that really got me into the whole motorcycle thing……..

It’s Like taking a couple hits of mescaline your little mind starts wandering and wondering and this is either going to be good and you chill out and enjoy the ride, OR you freak the fuck out and they take you away in a straight jacket.

By March I figured out a lot of the bike. Custom sheet metal, the tank, head and tail lights and Honda 50 handlebars. It’s a lot more work than what it looks like. The front fender mount is 3/8″ thick steel and acts as a fork brace. I made the fender mounts like traditional English bikes. I needed to machine and weld bungs into the gas tank and do a front tank mount. Then finish up with a rear fender. Still to go was wheels, brakes, wiring, battery box and seat.

The previous owner had just stuck pod filters on the carbs and the original battery box / air box was this big ugly plastic piece of garbage, so at least I had some room to work with. This is where reading all those chopper magazines when I was a kid comes in. I wasn't into Hondas, but if they had a Honda in the magizine that month I would read and look at it. On the Hondas they would always feature the custom battery box because Hondas have a similar wiring mess to deal with when you build one of those custom.

A good way to get rid of much of the mess is to try and mount all electrical the components on the battery box, because this way the wiring harness cleans it's self up.

On a custom "show" bike you would clean everything up even more, but I'm building a scrambler I use all the time and part of my style of building custom bikes is to make it look like it came from the factory that way. Basically you spend hours upon hours doing a lot of trick work the average person never notices.

It's form follows function engineering. The bulk of the wiring is all in one place and short. This makes working on the bike easy and it also makes the bike more reliable. I work on piss poor designed stuff day in and day out. The last thing in the world I want to do is build something that is a nightmare to work on. It also results in building a basic motorcycle, the way they were built back in the day. I'm into motorcycles not excessively complicated modern shit. If I grew up in this modern day era I'd probably not be interested at all in motorcycles. They have become end-user plastic vehicles that you throw away when you are done. I know I'm not alone in this thinking.