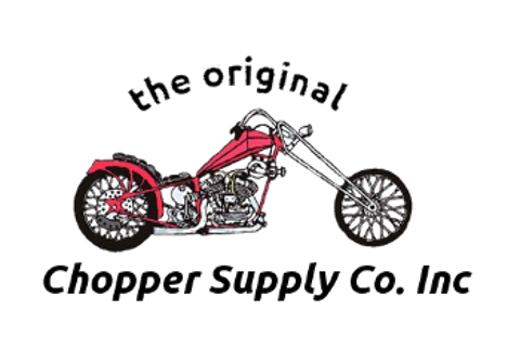 Established and incorporated in the great state of Texas in 1998.

Around 1996 I realized I was moving to Texas. I'd been an owner and employee of Haldon Cycle since 1988 and it was time to move on and get out of the toxic state of New Jersey. I just finished building "Margaritaville" the '49 Pan/Shovel in the picture. The internet was brand new and I spent many, many hours researching business names to be sure I didn't step on anyone's toes, because I wanted to build something big. Since I was 10 years old I was tired of hearing how Harley's were pieces of shit and was determined to change that. Actually a lot of Harley's are POS right out of the factory, which is why I am big on aftermarket parts, Quality Parts that can help you go fast and not have to push the motherfucker home. So with the idea of starting a real motorcycle shop to sell parts and service, the name Chopper Supply was born.

When I had picked the business name there were no "chopper shows" on the boob tube. Then in 2000 discovery channel ruined that. It was soon after everybody and their brother started showing up at the shop door wanting to talk about building their dream chopper. Problem is very few of them actually had money, and out of the few that did they didn't want to part with much of it and were under the impression it only took about an hour to build a bike, just like they fucking saw on TV. I figured that hey I'll talk to some of these people and maybe for every 20 or so I'd get a good customer or 2. The odds were stacked and it was like out of every 100 or so I might get 1 good one and 2 bad ones. I ended up wasting so much time, it was to the point I didn't want to even open the front door anymore. It's a good damn thing I was honest and worked on everything like it was my own. My customers from the NJ area really saved my ass shipping me work. I'd say 75% of my business in those days was from out of state. I want to thank you all!

Around 2004ish I got the stupidest fucking idea to work on jap bikes. To keep a long story short I ended up adding insult to injury, and being even dumber, buying a CBR 900RR Ho HO Honda. I'm fed up with the orange county chopper dickweeds and that honda is hanging from a hoist with the front end and fairings off and it looks like something out of Star Wars. The last 2 remaining brain cells get together and come up with changing the biz name to Alien Cycle. The plan was to get rid of Chopper Supply and go with Alien Cycle, except.... you can't just change a business name that is incorporated. Well I got the bright idea to let Chopper Supply dot com go, and it was quickly snatched up by some helmet business. I begged my accountant every year to help change the corporation name, and every year he said no. So I did a DBA as Alien and that satisfied me, but not completely. The demise of Alien Cycle was that I found out your DBA has a 10 year life span before having to be renewed, and because of the name, and that from time to time I'd work on something other than a Harley, it was being associated with foreign made motorcycles. Fuck That. I do believe it's time for another name change, hopefully the last.

So I got the 2 remaining brain cells cranked up again and thought long and hard and came up with Custom Vintage Cycle. Because that's who the fuck I am. I love old Harley's, I don't give a shit about correct stock parts ( yea the very same stock parts that would have you stuck on the side of the road more often than enjoying the middle of it...) and the name also covers possible plans for the future without having to change it again.

What the future holds.

As of 2017 "service" is no longer year round. I'm not interested in doing oil changes and tires. All engine building and what-not, will be done during the cool months from October through May. I will be concentrating on the "Parts Department" which for the most part will be online.

"Just say NO to hipsters, snowflakes and yuppie scum."